Who Does Your Body Belong To? 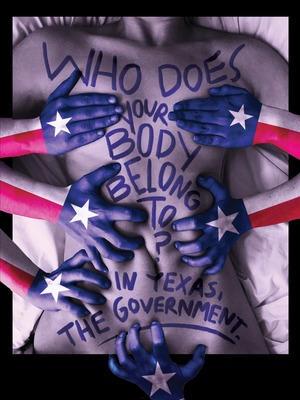 WHY THIS SUBJECT? Roe V Wade has been overturned in Texas and it is an infringement on human rights.

WHAT SHOULD WE KNOW ABOUT THE WORK? This piece is literally posing the question, “who does your body belong to?”. The hands with the Texas flag painted on them symbolize the state of Texas taking ownership over the bodies of anyone who is capable of conceiving and carrying a child. This is shown by the Texas flag hands grabbing at the body and immobilizing it. It is stopping the body from moving or creating autonomous decisions about itself. The writing utilizes hand lettering that I drew out in Procreate. I chose to make the lettering look jagged and sketchy because this issue isn’t clean and refined, it’s messy. I originally tried using type to convey the message, but it felt like it wasn’t integrated into the composition, which is why I chose to hand letter the text. With the color, I chose to create a bold and somber color palette. I really wanted to draw the viewers eyes to the hands with the Texas flag on them in order to help convey the message. That’s why the flags are the only color in the composition other than the lettering on the body. In terms of hierarchy, I wanted the hands and text to draw the viewer in so I made them the first thing that you will notice.

WHAT WAS YOUR PROCESS? I took individual photos with hands posed on different parts of a body and then brought them into Photoshop and combined the individual photos into one image using masks. I again used masks to apply the Texas flag to the hands and used blending modes to make it look more realistic. Then, I adjusted the colors to create a striking and somber tone. After that, I brought the image into Procreate and hand lettered the text.

Who does your body belong to, In Texas, the government, woman, body, naked, hand, red, white, blue, stars, stripes