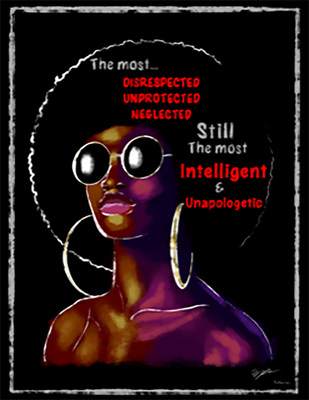 WHY THIS SUBJECT? I choose this subject because I wanted to focus on a group that is heavily underrepresented while at the same time heavily misrepresented. Majority of my life I have barely seen black women who fit the role of "role model" or who have seen so much success just like white men and women. We struggle so much just for being who we are but we would rather be nobody else.

WHAT SHOULD WE KNOW ABOUT THE WORK? My work is supposed to show the struggles that black women face and how strong they are. We are faced with numerous challenges for being black and being a women, yet we still look ahead and forge on. That's how powerful we are. We have the ability to do so much if we were given the chance to.

WHAT WAS YOUR PROCESS? I struggled at first about who or what I wanted to focus on. Then I realized that I wanted to give black women the spotlight for a change. I used a model with an afro that looked unapologetic to represent black women. "Disrespected, Unprotected and Neglected" are words Malcolm X used to describe black women in America. " Intelligent and Unapologetic" are words I would add on. In the dark space, I wanted the black woman to look vibrant so you would be forced to look at her for once.

The most disrespected unprotected neglected, Still the most intelligent and unapologetic, Black, woman, portrait, earrings, glasses