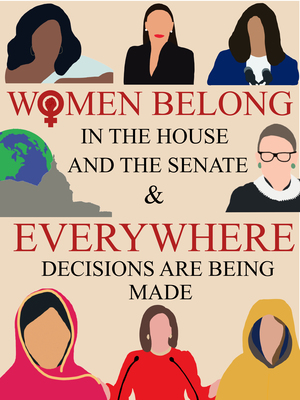 WHY THIS SUBJECT? This past election was both a reminder of how far we have come regarding female representation in office, and also a reminder of how much further we have to go. Though, I wanted this piece to not only inspire those who have political aspirations, but to women everywhere who have ever been held back in their field from their career aspirations because they were a women.

WHAT SHOULD WE KNOW ABOUT THE WORK? I am inspired by strong women who are resilient and dedicated to improving the welfare of others. The women depicted in this poster are powerful women in society who have personally inspired me one way or another.

WHAT WAS YOUR PROCESS? Created in Photoshop, I used a combination of painting techniques and layering, to create the images seen. When coming up with the phrase that I wanted on my poster, I wanted to mock the idea of a stereotypically saying that has been forced upon women. In this case my inspiration came from the sexist idea that women belong in the house/kitchen. I wanted to turn this phrase on its head and make a mockery of that idea showcasing that women are capable of being more -- they can be whatever they aspire to be. I also experiment with text positioning in order to convey the overarching idea that "WOMEN BELONG EVERYWHERE".

women, United States, House of Representatives, Senate, Ruth Bader Ginsberg, "women belong the the House and the Senate and everywhere decisions are being made"