The Unheard Voices of Environmental Injustice 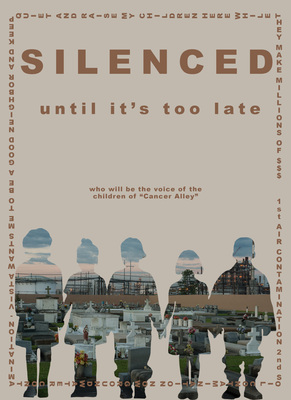 WHY THIS SUBJECT? I chose this subject because of its ability to relate to other subjects in the description of the project. It is environmental justice, but that injustice stems from so much more: racial injustice, economic injustice, etc.

WHAT SHOULD WE KNOW ABOUT THE WORK? This poster was made to address the lack of representation and the disastrous predicted outcomes of lives that are ignored until it is too late.

WHAT WAS YOUR PROCESS? I wanted to make a powerful statement in the hopes of grabbing the viewers attention, but not giving too much to where it was overwhelming. I added around my boarder a statement made in a for sale sign written by a parent in 'Cancer Alley' so it could feel more personalized and not just surfaced. I wanted people to relate themselves in a way that was universal, as everyone tries to protect the ones they love. I also chose to use the most unsettling colors from the palette of the image within the children to represent the pollution and misery within the area.

environmentalism, "silenced until it's too late", "who will be the voice of the children of 'Cancer Alley'", children, '1st air contamination, 2nd soil contamination", cemetery, headstones