We Can Do It, Too 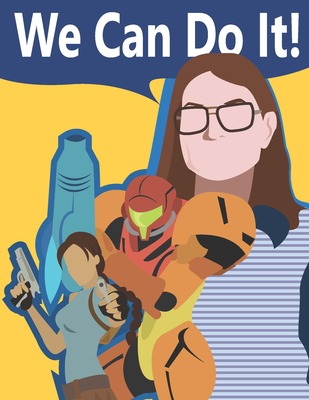 WHY THIS SUBJECT? I chose sexism in the gaming industry because of my close ties to both said issues and the industry itself. Ever since I was a child, I have always loved video games and that is partly what led me unto higher education--how I could begin to create things such as which I had been so inspired by. Despite large changes and social improvements, women have been seen as 'lesser' or ignored as a whole, especially in terms of employment. Male-dominated industries have long been intrinsic in America's work force.

WHAT SHOOULD WE KNOW? This piece is specifically about the varied difficulties women face both while playing, viewing, or creating video games. The gaming industry is especially considered 'male-dominated', and rarely features notable women who work sometimes twice as hard to get a third of the recognition. Even the creation of characters for games often include idealistic women. Women who are often thin, kind, and wear revealing clothing despite the setting. Male characters have always been diverse in design, body type, and temperaments. I wanted my poster to be a call to action for feminine creators--to showcase the influential women and characters that have managed to break this boundary.

WHAT WAS YOUR TECHNIQUE/PROCESS? I was largely interested in the STAND archive's collection about women's rights, and shocked by how much I could relate from the women's movement in the early 19th century to my topic. That website sparked my thinking into a possible protest poster. I wanted to incorporate imagery that could be largely recognizable, which is why I decided to do a rendition of the "We Can Do It!" poster created by J. Howard Miller, a poster which sparked women to take wartime jobs after many men left for World War II. Both the early 19th century movement and the resurgence of women in jobs in World War II created problems when social understandings barred the way for women to continue to incorporate themselves into a world that was, in lack of better terms, ruled by men. I wanted the bright colors and remix itself to make the poster more capable of reach to viewers, allowing them to stop and assess familiar colors and compositions.

"We Can Do It!", person, people, video game, characters, guns