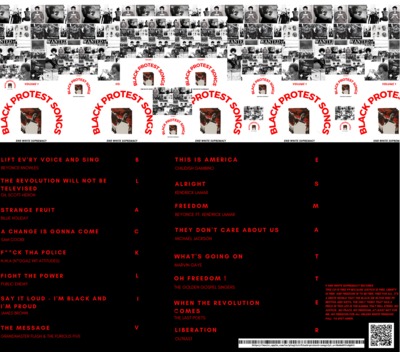 WHY THIS SUBJECT? I am a Black woman living in a country that hates her gender and her race. The constant state of living in fear is something that the Black race endures on a daily basis. With the rise of police brutality in 2020 to 2021, it is apparent and has stimulated a modern movement, while awakening my own awareness of racism, of a cause that has been around for decades.

WHAT SHOULD WE KNOW ABOUT THE WORK? This piece was inspired by the police brutality that is a part of the Black struggle in America. Although this has been an ongoing problem for Black people since the time of their supposed freedom, my generation is just now witnessing the severity and effects of racism first hand, rather than just hearing about them in textbooks. Racial injustice is now a mainstream topic that has led to the global consciousness of white supremacy along with performative support for minorities. The cover art is composed of images of important Civil Rights figures like Malcolm X, Martin Luther King Jr., Huey P. Newton, Rosa Parks, and Angela Davis. The collage also consists of images from past and present Black protests for equal rights. Some of the images included are taken by myself and photographer Taj Stoddart from the 2020 George Floyd Protest in Houston, TX. The theme of Black and White is used to show how racists often view the world as black and white. If you aren't white, you are seen as black and inferior. The red symbolizes the blood lost by Black people at the hands of injustice. The concept of making a CD cover and track list came from the idea that people, especially Black people use art to keep them going. Plus, Black people are at the root of music history in America. Music has always been an outlet for Black people and a way to get their voices heard worldwide while also relating to a community. These songs are dedicated to the Black struggle, freedom from oppression, and the End of White Supremacy. Some of these songs are old and have been passed down for generations, while some are more recent anthems that have fueled my generation. Nonetheless, the fact that songs such as these still have to be made shows how little America has progressed. It makes one contemplate if any race, other than white, will truly ever be free. A QR code is available for those interested in adding the playlist.

My technique consisted of gathering images dealing with black history and black protests. If the images weren't black and white, I used a grey scale effect. From here, I fitted the image onto a virtual poster board that used the same dimensions as an actual CD case. Then, I began adding more effects and duplicating images. The font came with trial and error of what I felt stood out. The background of the back cover was originally going to be white with black words but I started to play around with my color scheme and found that black and red captured the urgency.