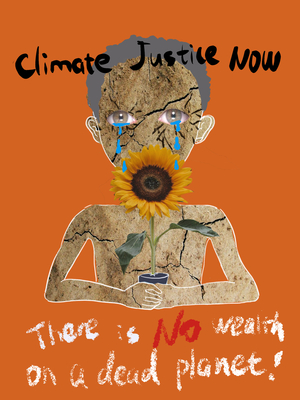 WHY THIS SUBJECT? My subject for the poster is climate justice. Unlike many common issues, this phase maybe not that familiar to everyone. This is a reason I chose it because I want it to be disseminated.

WHAT SHOULD WE KNOW ABOUT THE WORK? For the poster, I want to talk about people in different races, income brackets and national origins suffering unequal environmental crises. A basic proposition of climate justice is that those who are least responsible for climate change are suffering the most serious consequences. For example, in 1982, the EPA investigated four similar landfills in southern states and found that they were all located in black or lowincome neighborhoods. Moreover, the United Church of Christ Racial Justice Commission found that around the country hazardous waste facilities were more likely to be located in mostly minority communities.

WHAT WAS YOUR PROCESS? The black skin color and “child” symbolized vulnerability, while the United Church of Christ Racial Justice Commission found that around the country hazardous waste facilities were more likely to be located in mostly minority communities. The cracked ground which made people think of an environmental crisis is her skin and also represents that this could be what her home looks like. The color of the flower is going to be bright and the skin of the child is going to grey. Because I want to show that a beautiful sunflower makes a contrast with the child who looks pale and emphasizes the vulnerability of the child, or the people who are the victims of environmental injustice.

environment, climate, person, tears, flower, Climate Justic Now, There is no wealth on a dead planet!