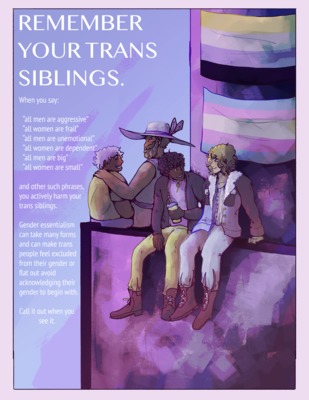 WHY THIS SUBJECT? In the past year, I came to the realization that I was genderfluid. At the time, it was a very difficult realization to have. I'd seen so many people in the LGBT+ community make sweeping generalizations about men in particular, even coming onto other people's sexuality and gender positivity posts to say things along the lines of all men being garbage. I fully understand where they're coming from, but it feels as though the phrase "all men are trash", which was intended as a method of directing frustration at the patriarchal system, has been twisted into a phrase aimed at people as opposed to a system. There was a segment of time where I couldn't stand the fact that I sometimes identified as a man because they were "supposed" to be bad or something. I quickly found out that my experience wasn't isolated and that other people had had the same things happen to them. No one should be scared of things that are hugely beneficial to them such as hormones or otherwise, especially not because of people who are meant to be supportive community members.

Of course this issue isn't stuck to transmasculine people alone. Gender essentialism forces its way into every trans person's life in some way or another. You "have" to look a certain way in order to be a certain gender. You "have" to have certain personality traits. Nonbinary people are lumped into women when not every nonbinary person is AFAB or transfeminine. People talk about men and then go "except for trans men", as if excluding them from any generalization is supposed to be a compliment. People don't ask themselves why they feel the need to isolate trans people from CIS people, but we all know that the rationale for it is transphobia. AMAB trans people bear a more obvious weight on their shoulders in that TERFs are so wellknown at this point, but even then, people don't seem to realize that simply condemning TERFs isn't enough. Lastly, when trans people express that issues such as these exist, you need to listen and stop speaking over us. You need to actively support your trans siblings, not just say they're valid. You need to make sure that no one is getting wrongly excluded. You need to erase the stigma regarding gender affirmation tactics such as packing and tucking. Most of all, you need to speak up, because saying that you support a group of people is easy. Making an effort to support them is much harder.

WHAT SHOULD WE KNOW ABOUT THE WORK? I hoped to create a sort of soothing or calm environment while representing trans people in a fully ordinary sense. I also made sure to include a few different age groups as well (as much as I could while only having four people in the image) because being trans isn't limited by age. Anyone can be trans, and everyone will experience their gender differently.

I began by sketching in Photoshop, then lining thoroughly. My lining process involves filling in gaps between intersecting lines and hatching. I then added flats using the trans and nonbinary flag colors and shaded. Lastly, I added overlays and the text.