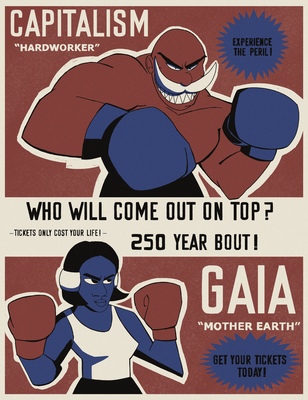 WHY THIS SUBJECT? The environment is a major concern for many, but a lot of people don’t know that corporations are responsible for most of the world’s pollution. Corporations spend lots of money to make ads blaming consumers for world-wide pollution instead of taking responsibility. I wanted to help shed light on this reality in more of a fun way to hopefully not scare off any possible viewers.

WHAT SHOULD WE KNOW ABOUT THE WORK? The illustration is based off of old boxing posters, using few colors to replicate the feeling that those posters had. The character representing capitalism is supposed to be a large, villainous-looking monopoly man.

WHAT WAS YOUR PROCESS? I sketched out some thumbnails that played around with the placement of the characters and text and then once I found one I thought was best I worked from there. My thumbnail sketches were made in my sketchbook and then I took pictures and put them into procreate, which is what I used to finish the illustration.

environment, corporations, pollution, boxers, capitalism, hardworker, experience the peril, who will come out on top?, tickets only cost your life!, 250 year bout!, Gaia, Mother Earh, get your tickets today!