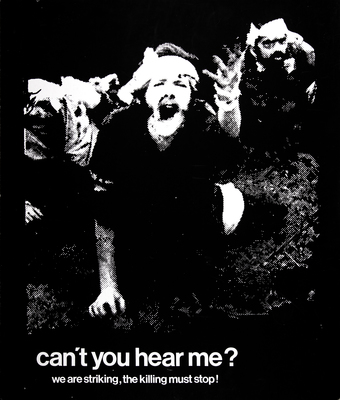 One of 22 protest posters created by students at Columbia College Chicago who called themselves the "Columbia Collective". They were produced in 1970 as reaction to United States actions at Kent State and the conflicts in Cambodia and Vietnam; some were exhibited in a Chicago, Illinois exhibit, Student Strike Posters. Image text reads "can't you hear me? we are striking, the killing must stop!" with three people crawling across the ground with white bandages tied around their foreheads. The central figiure holds its right arm outstretched toward the viewer, the mouth is open, and the leg also is bandaged. Black background with white text and black and white graphic.

This work is licensed under a Creative Commons Attribution-Noncommercial-No Derivative Works 4.0 License.