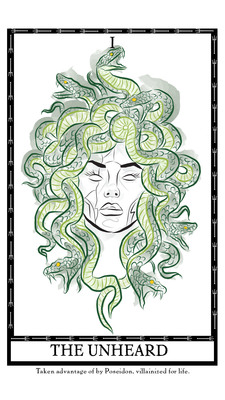 WHY THIS SUBJECT? The subject of sexual assault is highly relatable to women all over no matter their background. I wanted to commemorate survivors and create a sense of community through the work.

WHAT SHOULD WE KNOW ABOUT THE WORK? Medusa is a figure in Greek mythology who is seen as a villain. If you look into her story, you realize that she was sexually assaulted by Poseidon in Athena's temple and punished by Athena for it. While Medusa was the one getting assaulted, she was the one punished. Due to this misconception of Medusa, I wanted to portray her as a strong figure that is still noticeably in pain since some women often try to put on a strong front after an assault. I also wanted to nod to the story so I used Poseidon’s trident in the border. I added a tagline as well to briefly explain the story for people who do not know. I wrote “The Unheard” since even when women find the confidence to come forward, they are still sometimes disregarded and ignored. I didn’t want to use many colors but decided to use green for the snakes to represent rebirth. This is meant to represent women being able to overcome their trauma and take control of their lives again after such events. I wanted to do a tarot card to represent the irony of people using tarot to predict futures but how, in sexual assault cases, it can’t be predicted. I also used the number one on the tarot to represent a new beginning and the new life that can start after overcoming sexual assault.

WHAT WAS YOUR PROCESS? I hand drew the Medusa figure on Adobe Illustrator. I used Adobe Photoshop to put it all together and add text.