The Ever Lasting Abolishment 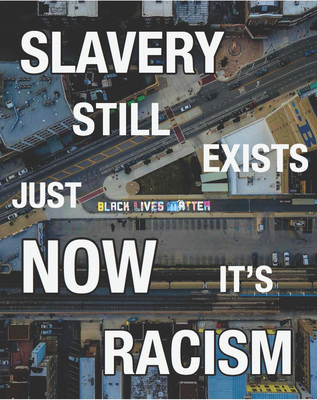 WHY THIS SUBJECT? I wanted to talk about this topic due to the fact that even though slavery has been officially abolished by the 13th amendment in 1865, I believe that slavery still exists, but just under a more modern way that is somehow accepted in society. Even though people don't actually physically own other human beings, the fact that racism still greatly exists towards black people shows how the abolishment of slavery was just the abolishment of public ownership of other people. The day every single person sees black people as the exact same equal person as them is the day slavery will actually be abolished.

WHAT SHOULD WE KNOW ABOUT THE WORK? For this specific poster idea I wanted it to be simple but powerful at the same time. I wanted three specific words to stand out to create a different sentence from the original longer sentence, Slavery Now Racism." The meaning of this sentence is to let the audience know that slavery still extsts but just now it is called a different word known as Racism. The background of my poster is a picture taken By a friend of mine named Carson Cloud who took this with a drone back when the black lives natter movement was starting to peek in 2020 after the death of George Floyd.

WHAT WAS YOUR PROCESS? I wanted to keep the poster really simple but I wanted to words to be kind of mysterious but straightforward right at the same time. Originally I had a different idea for the poster and when I uploaded my draft, I got the idea to make it very minimalistic to keep its meaning short and powerful. Originally I had a very different sentence that had the same meaning "slavery still exists but just now in a legal way." To me, I felt this sentence could be a little misleading and I think that what I changed it to was much better and easier to understand since I was going for that simple feel.