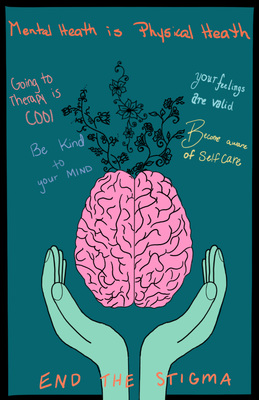 WHY THIS SUBJECT? Mental Health

WHAT SHOULD WE KNOW ABOUT THE WORK? I decided to use a handwritten type, and actually ended up creating several handwritten typefaces. I chose a simple color palette of bright colors against a dark teal background to really make them pop. The image I chose is representative of a healing and growing brain, resembling a seed because it is sprouting flowers. One thing that makes this poster special to me and that should be noted is that each phrase on the poster was written by someone who has become a significant member in my own support group/system. These people include my boyfriend, my therapist, and some really good friends. I think it is crucial to have a good strong support system when learning to cope with your mental disorders, as I have learned.

WHAT WAS YOUR PROCESS? I started off by using a typeface called Noteworthy, but as I got more into the design process, I realized that it would be more effective to use actual hand written type in order to give off the friendly and positive vibesI was aiming for. I asked some people to write out a phrase of my choice, take a picture and send it back to me. From there, I brought it into a software program called ProCreate and I traced their writing using a pen stroke called Studio Pen. Afterwards, I applied my color palette to each phrase and placed it on my poster. The graphic in the center is inspired by something I have often seen in other mental health posters. I wanted to design something that represented healthy growth and healing, and what better than a brain sprouting flowers.

mental health, Mental health is physical health, Going to therapy is cool, Be kind to your mind, Your feelings are valid, Become aware of self care, End the stigma, brain, flowers, hands