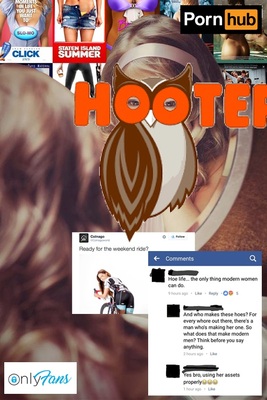 WHY THIS SUBJECT? It is so very important to me to raise awareness about how women in media are perceived through the male gaze theory. The sexualization of women in media affects young girls so much and I wanted to show that through a collage.

WHAT SHOULD WE KNOW ABOUT THE WORK? chose a collage to fit multiple ideas into one poster. The inclusion of Only Fans has been debated so I wanted to explain my reasoning as well. I know Only Fans gives sex workers power to monetize off of the male gaze theory and can be positive is some ways, but still there is a lot of negativity that surrounds it, only fans pages are constantly getting leaked, men will send you hundreds of messages asking you to live out they're weirdest sexual fantasies. Only Fans as a company also takes 20% of your profit which if you're trying to make a living in turn causes you to post more and more and use their platform which is ultimately exploiting you. Some people have positive experiences with the site but some people have much more negative experiences, and growing up and seeing a website for sex workers with so much debate around it would not be good for a child's mentality.

WHAT WAS YOUR PROCESS? I used a collage so I could fit as many pictures in there as I could.