Roll a D20 To Be Seen as Equal 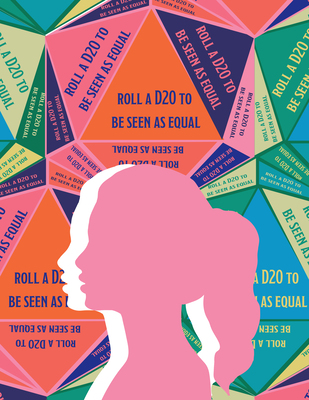 WHY THIS SUBJECT? Focusing on gender discrimination, i went to a place of my life that it is much more common to be misogynistic and discriminatory against women and non-cis people. The TTRPG community and specifically the D&D community is known for catering towards cis men for pretty much the majority of its' creation.

WHAT SHOULD WE KNOW? The phrase "roll a d20" alludes to the dice rolled when playing the game itself, using a 20-sided die to throw your luck in hopes of getting the highest number possible (20). Rolling a d20 to be seen as equal gives the meaning that it is difficult to achieve that, even with the same knowledge as a man.

WHAT WAS YOUR TECHNIQUE/PROCESS? I used illustrator and traced various free transparent designs from the internet. I created a color scheme that was more feminine and then added text to each visible side of the traced dice. I inverted the colors so there was more variety with the dice in the background and kept an empty space of a silhouette of a woman to resemble the discrimination. The font I used for the text is a similar font to the official D&D website, just tying in more aspects of the game.