Will I Ever Be Seen As Equal? 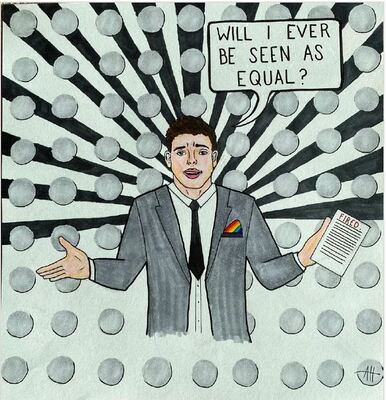 WHY THIS SUBJECT? LGBTQ+ discrimination in the workplace is something not openly addressed, and many members of the community feel uncomfortable even sharing with coworkers that aspect of their personal lives. This poster's aim is to add commentary to this issue and topic.

WHAT SHOULD WE KNOW? When thinking about what topic to choose, and what direction I wanted to take my final poster in, I thought about focusing on something that we didn't necessarily focus on too much in our class. LGBTQ+ issues are very important to me, especially since I happen to be a part of that community. I thought about some ways in which these people face adversity, other than the potentially obvious ways. In my poster image, the male figure is holding a piece of paper with the word “Fired” on top, implying he was just given the form from his employer. The topic of my piece comes through in a more subtle way, through the rainbow pocket square in the figure’s jacket. It represents his sexuality and highlights it in not an overly exploitative way, but it gets the message of the piece across of LGBTQ+ discrimination in the workplace. I learned about the ways in which we can analyze images, and draw deeper meaning using contextual clues from worksheets like the Document Analysis one. I would say that document impacted the creation of this piece the most because it reminded me how to make my poster in a way in the most easily interpreted way, but still keeping it rooted in being a conceptual piece that forces viewers to take a closer look. Our discussion on Emory Douglas also influenced me while making this piece, because it allowed me to think more about how to make my piece have a strong message or topic at its core, and though my poster isn’t as politically charged as much of Douglas’ work, it still influenced me.

WHAT WAS YOUR TECHNIQUE/PROCESS? Sketching in pencil, going over sketch with pens and markers, finishing off piece by adding colored pens.

LGBTQ+, "Will I ever be seen as equal?", person, suit, rainbow handkerchief, fired notice