A Genocide in the 21st Century 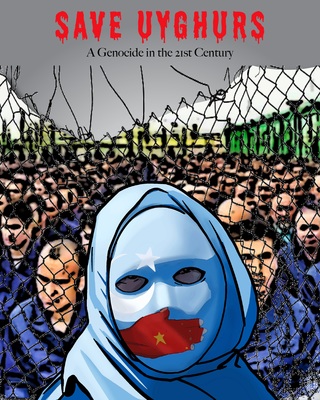 WHY THIS SUBJECT? The focus of my poster is the genocide happening in Xinjiang, China. The Uyghur Muslim ethnic group is being targeted and put in concentration camps. The communist party in China refers to the concentration camps as education camps. The people in the camps have to go through traumatic experiences such as being separated from family members, being forced to do practices against their beliefs, being used for free labor, etc. These practices are inhumane, and the mass media is barely covering the issue. As a Muslim, it is very tragic for me to see people from my community go through this suffering experience. With the lack of media coverage, I wanted to create a poster to raise awareness.

WHAT SHOULD WE KNOW ABOUT THE WORK? I want people to know that this issue shouldn't concern Muslims only. The is an issue of human rights issue, and everyone should care about it. People are forced into these camps without their consent. As a Muslim, I am hurt, that people from my community have to go through these inhumane actions and traumatic experiences, there aren't many people speaking up on the issue. Even people who manage to escape from there suffer from effects and trauma for the rest of their lives.

WHAT WAS YOUR PROCESS? When designing and creating this poster, I was influenced by the fact that this issue is barely getting media coverage. Therefore I wanted my poster to capture attention. I used saturated colors that are catchy to the eye, yet colors and symbols are symbolic of the issue. Since this is a topic not many people know a lot about. I used symbolism that is meaningful to this issue, because if these symbols are recurring in posters, then people will slowly begin recognizing these symbols. For instance, The woman on the poster is a symbol for the voice of Uyghur Muslims in protests. Therefore I positioned her in the foreground of the poster as she is the voice of the people in the back. I also used text such as “A Genocide in the 21st Century”, because China likes to refer to the concentration camps as reeducation camps, but everything happening follows the criteria of ethnic cleansing and genocide. It is crazy that this is still happening in the 21st century. My thought process was to take artistic decisions that deliver my message more effectively.